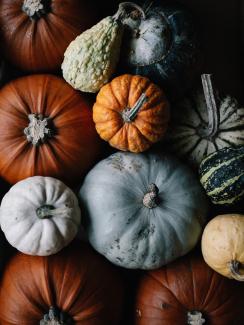 Two weeks ago I had the pleasure of attending a conference in California. This conference was a lot different than many of the conferences I had attended before. During a normal finance conference the attendees will bounce around between windowless conference rooms, wear business casual attire, and eat subpar chicken. This conference was set on a boardwalk overlooking the ocean with local food trucks coming in to cater. It’s safe to say that getting to walk around in flip flops on the sand was a nice change of pace!

Unfortunately, the picturesque weather was the complete opposite of what was going on in the financial world.

On the second day of the conference, we received the latest inflation reading. Although inflation had retreated slightly from the prior month, the actual number came in higher-than-expected. This led markets to fall by 4% in one day, and ultimately to a 10% decrease since then. The initial rebound that we saw in August was erased very quickly.

One of the cool things about being with a bunch of other financial planners is the ability to share stories and ideas. During one of our group meet-ups we discussed the story of the walking dog. The story, as told by money manager Ralph Wanger, reads as such…

He likens the market to an excitable dog on a very long leash in New York City, darting randomly in every direction. The dog’s owner is walking from Columbus Circle, through Central Park, to the Metropolitan Museum. At any one moment, there is no predicting which way the pooch will lurch. But in the long run, you know he’s heading northeast at an average speed of three miles per hour. What is astonishing is that almost all of the market players, big and small, seem to have their eye on the dog, and not the owner.

This year has been incredibly volatile. Picking off of blogger Ben Carlson, we have seen the market move in a bunch of different directions. Put simply, the dog’s been active.

It’s easy to infer from the above chart that stocks are plunging, and with so much reported bad news it’s hard to see the decline stopping. It’s during these period that zooming out becomes important.

If we simply look back to early 2021, when COVID still had restaurants in Minnesota closed, the market is basically flat. Additionally, it’s still well above where the market was back in March of 2020. In order to get back to that point we would need to see things fall another 37% from their current levels. 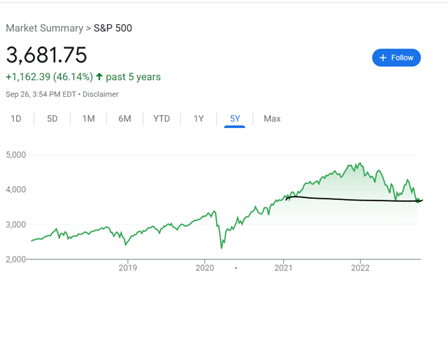 This is not meant to diminish what we are going through. Between high inflation, a rapid rise in interest rates, and less-than-heartwarming comments coming from the Federal Reserve it can be easy to feel down about the current financial environment. Focusing on the active dog is an easy thing to do.

During his recent press conference, Federal Reserve Chairman Jerome Powell reinforced the Fed’s desire to drive down inflation. In his questioning by the press he mentioned that there is likely to be some pain in the war against inflation. This inevitably led to many news outlets calling for an upcoming recession.

We have written about this in prior postings, but recessions are not always inherently bad. Recessions are a natural part of the economic cycle. These economic periods help to rid the economy of excess and inefficiencies. If a recession is deemed a requirement to slow the rate of inflation, it could result in a stronger economy, and thus a stronger market, on the other side. Unfortunately, this might result in some short-term volatility and pain.

For those who have been working with us for a while, you have likely heard us say that market declines almost always go too far, and that markets almost always recover before the economy. The problem is that the future is unpredictable, and the timing of these events is impossible to know.

With the future being unknown, and the present not offering the best of news, it can be helpful to reflect on previous market cycles.

The most recent, extended market declines happened during the period from 2000 to 2009. Many of you were investors during these periods, and likely still have some scars from them. However, the passage of time can often cloud memories from these periods. It’s important to reflect on these periods to help ground us, and to remind us that we’ve previously been through something we are now experiencing.

During the two separate drawdowns that decade we saw U.S. markets fall by at least 50%. Again, it can be hard to remember periods like this, but the U.S. stock market was quite literally cut in half.

In the first highlight on the left we can see that a diversified portfolio actually had a positive return during the period running 2000-2002. It wasn’t positive the entire time, but worked out that way over time. As mentioned before, during this period U.S. markets fell by about 50%. Diversification across asset classes helped to shield against the large drawdown a lot of investors experienced.

The second highlight to the right helps to demonstrate diversification’s ability to aid in recovery. The 2008 market year was unavoidable as global markets all fell together. This resulted in this portfolio being down by about 24% for the year.

This may sound obvious, but the more steep the downturn the harder it is to get back to even. Our portfolios, which are down less than the overall market, should recover much faster whenever the current environment shifts.

When we run our models, we plan for periods that look a lot worse than what we are going through now. Furthermore, we know that diversification works in the long-term. Not one of our managed portfolios is down as much as the overall market this year.

For our younger clients, this is a great time to be entering the market. Chances are you won’t need the funds for many, many years. The chart below is a bit dated, but it shows the forward-looking returns of the S&P 500 after steep market drawdowns. In each of the prior periods of underperformance we saw double digit returns after the market bottomed. 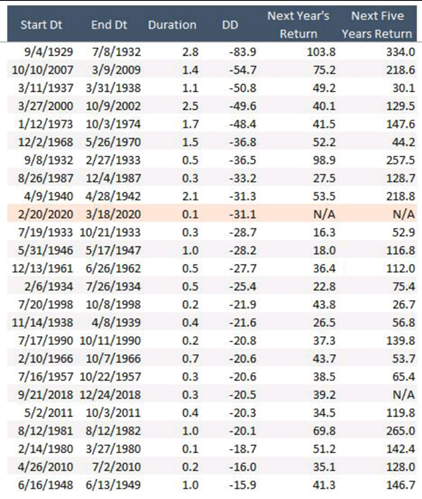 For our older/retired clients, we are actively reviewing cash positions to make sure your distributions are there when you need them. For the vast majority of our retired clients we tend to shift more of your money into bond positions. This is done in part to dampen volatility, while also ensuring that dollars are available when they are needed.

Although short-term bonds have taken a hit this year, the forward-looking returns on bonds have become much more attractive. At this time last year a 5-year bond was yielding about 1%. As I sit here today a new 5-year bond is yielding over 4%. This will inevitably lead to a higher return on that side of your portfolio.

Seeing account balances going backwards is never fun. However, these are also the periods where long-term wealth can be created or destroyed. Being able to stay disciplined, diversified, and invested will ultimately lead to a better investment result when we come through on the other end. And yes, there will be an end to all of this.

Until then just know we are watching your portfolio diligently. Rebalancing is happening as needed. To the point that changes can be made for tax purposes they are being made. We still believe in the investment philosophy, and we don’t believe that anything is broken.

Finally, we invest our money the same way that you do. The allocation to stocks and bonds might be different, but the same underlying philosophies and investment vehicles are being used. We’re with you on this ride, and will be ready to triumph with you on the other side.

Please don’t hesitate to reach out to us for any questions or concerns you may have. We are here to be a crutch during periods like this.