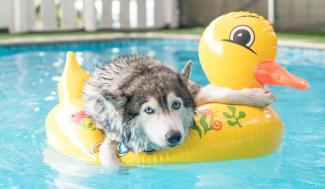 In preparation for this posting, I had to look up what the “official dates” are for the dog days of summer.  What I consider to be the most reliable source for this period is a staple for our Midwestern people, The Farmers Almanac.

Much to my surprise, as I sit here on August 11, the dog days of summer typically run from July 3 to August 11. Pretty nice timing I must say!

This summer has undoubtedly been volatile, especially from an economic and market standpoint. If you’ve kept up with any of our previous postings, there hasn’t been a ton of positive news to share. Between stock prices falling, interest rates rising, and inflation being a front-page headline, it’s been hard to escape the negativity.

During these periods, reflecting on past experiences can be helpful.

We’ve been working through some updates on our website lately (check them out!) which has required us to revisit a lot of our old postings. The one that really spoke to me was a newsletter that we sent out in April of 2021.

I’ll let you read or reflect back on this one, but the thing that really stood out to me was one of the concluding paragraphs…

We have been receiving many questions about when the other shoe is going to drop. As always, we really don’t know. Statistically speaking, we should expect a 10% - 15% correction every 11-12 months. Someday it will happen, but then it will inevitably recover.

We as a firm, and as individuals, are not in the game of speculating on market reactions. However, you can make a pretty strong argument that this year the shoe has dropped.

Since the start of July, we have had three big economic reports come out: Q2 GDP Data, July Jobs Reporting, and July Inflation Numbers. All three of these were strange in their own right.

GDP is reported on 4 times each year and reports whether the economy grew or shrank. This data becomes very important as it can be an indicator or whether or not we are in a recession. The loose definition of a recession is 2 quarters of GDP decline. Well that threshold was hit in July when we reported our second straight decline.

I use the word loose as this is not the only indicator. Whether we’re in a recession or not has become a hotly debated topic in the financial world. So hot that the White House released it’s own blog posting their definition. And yes, the White House has a blog!

Another recessionary indicator is a decline in job growth. When we are traditionally in a recessionary period, we start to see jobs declining and unemployment ticking up. The jobs report that came out last week blew expectations out of the water. The economic estimates were expecting that there would be about 250,000 jobs added during the month of July. The actual number came in at about 528,000, or more than double the estimates. This pushed the unemployment level down to 3.5%, which is the lowest we’ve seen since February 2020. We’ve officially roundtripped the Covid decline.

The final economic data point, the July inflation reading, came out on Wednesday. We’ve mentioned this in past postings, but inflationary numbers are reported on year-over-year basis. From July of 2021 to July of 2022 the inflation rate came in at about 8.5%.

Now this is obviously still pretty high. However, some comparing of numbers need to be done in order to get a good grasp on what this really means. The June reading reported a month earlier came in at about 8.9%, so a slight reduction there. In addition, from June 2022 to July of 2022 the inflation rate was basically flat.

If you have met with us in the past couple of months you have probably heard us mention these inflation numbers are likely to come down. The large increases to the inflation rates started in the latter half of 2021. When you report inflation on a year-to-year basis, and you have a large number 12 months ago, the percentage difference starts to pinch. That’s not to say that we will go back to the 2%-3% we became accustomed to anytime soon, but it should mean we start to see those 8%-9% rates start to drop.

Because of this, we’ve actually gotten some pretty solid stock market performance over the past few weeks, whether we are in a recession or not!

Since the dog days started, we have seen the S&P 500 increase by about 8.5%. Even further, the companies that our portfolios are tilted towards (Small Companies and Value Stocks) have seen an even larger increase. We should also start to see a better performance on the bond side as the low-rate purchases mature and get replaced with higher interest rates.

There is still some work to do to get back to break even, and we are not out of the woods quite yet. It is entirely possible that the recent surge is a mirage and prices could retreat further. However, this is the first time we’ve had some good news and positive market movement in quite some time.

As always, we are more than happy to connect and answer any questions or concerns. Until then we hope you and your families have a great end of summer, and a nice start to fall.