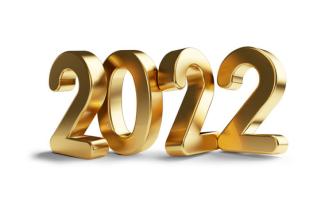 The start to a new year was a welcome sight for investors. On the heels of a couple of very positive years, 2022 presented a year of struggle across every asset classes.

Outside of cash and commodities (which was largely aided by the rise in oil and gas), the entire globe saw a market pullback. Making the pullback even more painful was the decline in existing bond prices. By December 31 the U.S. Aggregate Bond index was down about 13%.

Bond markets operate on a different landscape than stock markets. Bond prices rarely fluctuate to the extent they did last year. The thing that makes 2022 an outlier is the rapid rise we saw in interest rates throughout the year. At the start of 2022, the Fed had the Fed Funds rate at 0%. By the time the year finished, this number had reached 4.5%.

The decline we saw in bonds largely came as a result of repricing. In September last year, we wrote that a new 5-yr treasury bond purchased just one year earlier would have come with a 1% interest rate. On the other hand, a new bond with the same term (now 4 years), could be purchased with a 4% interest rate.

In the example above it’s pretty easy to see that the new 4-yr bond at 4% would be more valuable than the original 5-yr bond (now a 4-yr bond) at 1%. When this gap in interest rates is created the original 5-yr bond reprices itself to have the same forward looking yield as the new bond. This results in the current price of the bond falling.

In prior market cycles, the Fed has risen rates at a less rapid rate. When interest rates rise slowly, the repricing that happens is much less severe, due in large part to the new bonds not being that much more attractive. However, with the Fed increasing rates at a historically fast clip the prices in existing bonds were hit hard.

Now there is a silver lining that comes with this. As long as the bonds continue to be held, the forward yield will be the same as the current yields on those bonds today. In the example above, the original 5-yr bond was repriced pretty drastically, but from here until maturity the yield will be 4%. Additionally, as new bonds are being purchased, they are being bought with rates that haven’t been seen since the mid-2000s. Higher yields on the bond side of portfolios will undoubtedly improve performance moving forward.

2022 was also a challenging year for stocks. The 2020 and 2021 calendar years saw the S&P 500 reach new all-time highs on 113 different occasions. 2022 saw just one all-time high, which came on the first day of trading in January. The next 12-months saw a decline of 18%. Even worse, the growth and technology sector saw declines in excess of 30%. Some of the individual companies in that sector saw even worse declines that may never be recovered.

In the early parts of the year, the Fed was stating that inflation was going to be transitory in nature, and that any rate hikes would be minimal. As we know now, inflation was a lot more sticky, which led to the rapid rise in interest rates mentioned above.

Unfortunately, a lot of the “risks” we saw last year are still in play heading into 2023. I put risks in quotes as some of those seemingly risky things may ultimately result in better performance numbers going forward. If inflation starts to ease, the Fed slows their rate increases, and unemployment remains low, then it wouldn’t be a surprise to see markets head north.

On the other hand, if any of these persist, or a new risk comes our way, markets could continue to struggle.

As dim as 2022 was, there are actually a few bright spots that shone through. The first was reinforcement of diversification as a sound investment strategy. The vast majority of markets, both foreign and domestic, saw double digit declines. A properly diversified portfolio did experience a decline, but far less severe than the double digits other markets experienced. The vast majority of our portfolios saw declines in the 6% - 9% range.

Small company and value stocks, which we allocate our portfolios to, also saw a less steep drop off compared to their large and growth counterparts. The chart below shows Q4 and 2022 annualized performance for both U.S. and International markets. Across the globe, we saw an outperformance in small companies and value stocks. Additionally, international markets actually outperformed U.S. markets across almost every sector.

Finally, performance numbers in years following declines tends to be positive. A diversified portfolio has only seen a back-to-back decline three times. Once was in 1930-1931 during the great depression, again in 1973-1974 when annual inflation reached double digits, and finally in 2001-2002 during the tech wreck. However, within 5 years every single one of those portfolios was positive. 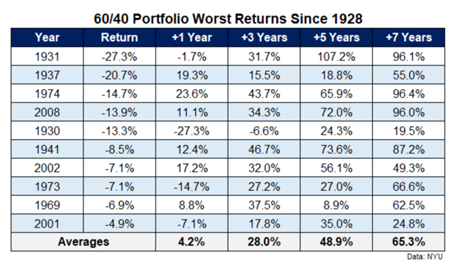 There’s no guarantee that 2023 is going to be better, but the year has gotten off to a pretty fast start. As I sit here today the S&P 500 is up a bit over 4% year-to-date, with small and value outpacing it at 5%-7%. If positive economic news continues to come out we may well see these trends continue. Unfortunately, it’s just impossible to know what the next 12 months will look like from a market standpoint. But rest assured that we are keeping a watchful eye on your hard earned money. As rebalancing is needed it is taking place. And, as always, we invest our money with the same long-term philosophy that you do. We’re here to assist with any of your questions or concerns. Please don’t hesitate to reach out.