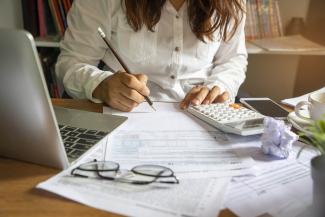 Just like that, the 2018 tax changes that were supposed to be mostly permanent have been altered. In the following paragraphs, our associate financial planner, Justin Gabriel, breaks down the pertinent details of the new law that may be applicable in the years ahead.

On Friday, December 20th, the President approved a new $1.4 trillion spending bill. Attached to this deal is a piece of legislation that has been sitting around for the better part of this past year. The Setting Every Community Up for Retirement Enhancement (SECURE) Act will be enacted prior to ear end.

With this act comes notable changes to retirement accounts that will begin immediately when the calendar flips over to 2020.

Prior to this act, IRAs that were inherited carried required minimum distributions (RMD’s) based off of the inheritor’s age. These distributions, also referred to as “Stretch Provisions” were required as a way to pay taxes on dollars that had been deferred for decades under the original account holder, yet allowed the inheritor to minimize the damage by stetching out that tax impact over their lifetime.

Under the SECURE Act, all retirement accounts that are inherited must be emptied out after 10 years, but do not necessarily need to be done on a year-by-year basis. This ends up being a big plus for inherited Roth assets as the accounts can grow tax free for the full 10 years before having a forced withdrawal.

On the other hand, it does create an interesting planning opportunity for inherited Traditional IRA/401(k) assets as maximizing tax brackets year-by-year becomes a more important task in order to avoid a large tax hit in year 10.

There are 5 exceptions to this rule. These exceptions, called “Eligible Beneficiaries”, will continue to use rules under the previous tax law. The exceptions are…

So, what does this rule mean for you?

If you currently have an Inherited IRA, these rules do not change anything for you. Because SECURE is slated to start in 2020, these rules will, in most cases, apply to retirement assets inherited after the start of the year. Ironically, one of the exceptions to this rule are government retirement plans, such as the plans that are used for members of Congress, but I digress.

One change that will affect every person with a retirement account (so long as they live to 72), is the new Required Minimum Distribution age.
Before the passing of SECURE, individuals with tax-deferred assets (IRAs, 401(k)s, 403(b)s, etc.) were required to take a certain amount out of their tax-deferred accounts, based off of their age, starting the year they turned 70 ½.

Under SECURE, this age is now 72. This creates a lot of flexibility for people who don’t necessarily need their required minimum distributions because fixed incomes, such as pensions and social security, provide enough for their spending needs.

For the people who turn(ed) 70 ½ between July 1st and December 31st of 2019, you are unfortunately grandfathered into the pre-SECURE rules. Meaning that you will still have to take your RMD in 2020 as a 71 year old.

Prior to SECURE, any distributions from 529 plans to pay for student loans would carry the same penalties as they would if withdrawn for non-education related expenses. Now, dollars in 529 plans can be used to pay off student loans, up to a lifetime max of $10,000.

On the surface this seems like a huge plus, but there are caveats to this new rule that need to be considered.

The other caveat to this is that the state does not necessarily need to conform to this. Minnesota residents ran into this problem in 2018 when state legislators were unable to get the new state tax law to conform to the 2018 federal changes prior to year-end.

The situation that Minnesotans ran into during the 2018 tax year was that, under the new federal tax law, you could use 529 dollars to pay for pre-college tuition without getting penalized on their federal taxes. However, because the state of Minnesota had not conformed, people who used 529 dollars for pre-college tuition got penalized by the state of Minnesota.

This is not to say that Minnesota, or any other state, will not conform, but it is something to be cautious about on a case by case basis.

Under the new law, there is a new exclusion created to the 10% penalty for early withdrawals from an IRA or qualified retirement plan. Each parent may withdraw up to $5,000 from their IRA penalty-free (regular taxes still apply) as a Qualified Birth or Adpotion Distribution.

The details also reference that this is a “per event” exclusion, meaning it may be used for each birth or adoption. In addition, there is an option to “repay” the amounts distributed at a later time when funds become available to do so.

There are a variety of provisions related specifically to qualified retirement plans (ie. 401k) that are more geared toward the plan level rather than having significant individual impact.

As with any changes, there is a mixed bag of pros and cons, all of which can differ from person to person. For a vast majority of the population the changes are minimal or non-existent. For others it allows a bit more flexibility as they age.

And this serves as yet another reminder that permanent changes are almost never permanent.