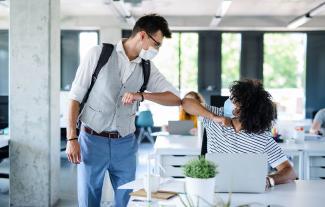 Headlines today are centered on the sharp market drop around the globe, which is being tied to the increase in reported Coronavirus (COVID-19) cases outside of mainland China. Over the weekend, South Korea, Japan, Iran and Italy all saw a surge in cases.

As we wrote last week, this epidemic is not something for the world to brush off and take lightly. Unfortunately, reports to this point have been all over the board in terms of what it does to people, how it spreads, and even where it came from. This lack of information (or outright misinformation) is what leads to abrupt panic-selling like we saw in financial markets today.

Make no mistake, this virus has made an impact on global economics. Rarely outside of wars have large portions of the global economy been effectively shut down. Recent estimates from Bloomberg suggest that China is currently operating at 50% capacity, and for obvious reasons, there has been a major impact to the travel sector.

One of the silver linings (and I use that term with hesitation) that is occurring simultaneously with this market drop, however, is that now that the disease has spread beyond China’s notoriously private borders, information and data about the virus should become much more accurate, and many of the best minds in the world finally have access to study its impact, its origins, and work toward a cure.

The WHO (World Health Organization) and European Centre for Disease Prevention and Control arrived in Italy today. Notably, the WHO, while concerned about the pace of spread, added that in 4 of 5 cases in Italy, people experienced mild or no symptoms at all.

Yes, this decline was sharp, but it is not that uncommon. Also, be very careful about the stats you are reading and hearing. Social media acts as an echo chamber in times like this, and as we all know, it is chock-full of incorrect and inaccurate information. Right, wrong or indifferent, in the “report it first regardless of accuracy” era we live in, this echo chamber has a tendency to spill over to mainstream media.

In an incredibly well-timed (pre-scheduled) interview, Warren Buffett spent 3 hours in an interview with CNBC this morning before markets opened. In his comments related to the virus and the market sell-off today, he posited the question, “how can it be bad news unless you have to sell stocks? If someone came around and offered you 2% less for your house today than yesterday, but you like your house, you don’t have to do anything.” And, “we (Berkshire) certainly won’t be selling.”

As we wrote last week, this is certainly not the first epidemic we have faced, and it will not be the last. While short-term movements are inevitable, those that maintained discipline and stuck to their financial plans fared well on the heels of them. 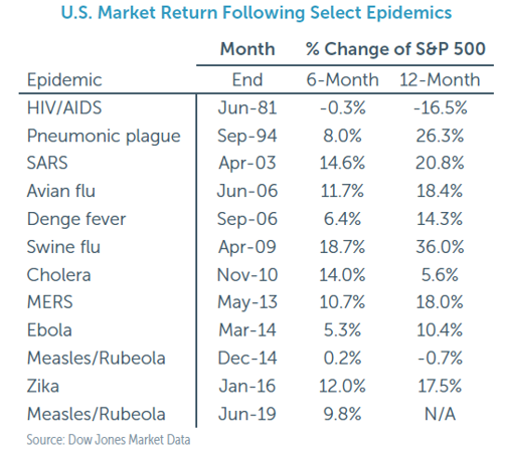 We build portfolios to account for unpredictable and uncertain times. While we do not know how or when this will end, it inevitably will. And with the combination of history and solid academic research behind your portfolio, we know that it will weather this storm. Your financial and investment plans account for these uncertainties, and we are here to walk through it with you.